I had planned for weeks and traveled 277 miles from my home to arrive at this place. The rugged coast of Maine’s Acadia National Park and its incredible landscape. Being winter, the park was closed for the season and the tourists gone. I was alone, looking at the ocean gently intersecting with the monolithic geology of the shoreline.

Pausing to gather myself before starting to roam about and shoot, I perched on a rock in anticipation of watching the sun peek above the horizon. While watching the scene unfold before me, I became entranced in that moment – just me, the sky, the water and the landscape. I was in the great wide open, alone with elements. Many thoughts crossed my mind as I sat there and took it all in, but they quickly vanished as the awesomeness of this place became set in my mind.

I realized the morning light I traveled all this way to photograph was quickly expiring, so I stood up, setup my tripod and captured the image below. I took many other images that morning, but this one best captures the essence of that moment.

Simplicity of a Primitive Age, 2010 – from the series Momentary 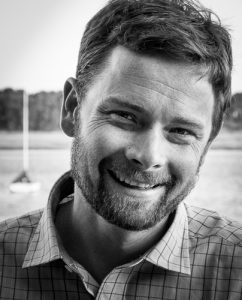